Sepsis and MNCH in Bangladesh 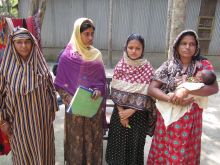 The CICH was established in 2006 with the aim of more effectively engaging hospital and UBC faculty in global child health capacity building and knowledge generating projects in partnership with similar institutions within the countries we work. We are currently working in Uganda, Bangladesh, India and China.

Recently we have been focusing on a largely unrecognized, but extremely important contributor to maternal and child mortality – sepsis. Here in North America over 200,000 people die of sepsis each year, but this primarily affects the elderly and post-operative patients. In low income countries sepsis is mostly found in young mothers shortly following delivery or in under-five children. Our project in Bangladesh, in partnership with the Ministry of Health and Family Welfare and the International Centre for Diarrheal Disease Research, Bangladesh (icddr,b) is addressing the prevention or early detection and management of maternal, newborn and under-five childhood sepsis. Sepsis is the end stage of many infectious illnesses and is estimated to be the end cause of over 50% of all under-five deaths, accounting for over 3 million deaths per year.

I am currently in Bangladesh where I visited one of the sub-districts we work in last week. There I was able to meet with families that have benefited from the new services put in place to strengthen community engagement, offer 24/7 call-in advice plus emergency transport and upgraded, higher quality of care in sub-districts hospitals. In the photo you will find a recently delivered newborn, her 16 year-old mother, the grandmother and the great grandmother. The young lady with the folder is a community health volunteer who had visited the family to inform them of the new services and to create awareness of warning signs for a serious infectious illness. She also encourages families to consider a facility-based delivery, as this is the most effective means to prevent maternal or newborn sepsis.

Two weeks earlier this young mother went into labour while at home alone with the great grandmother. Interestingly, the great-grandmother is a practicing traditional birth attendant who might have decided to carry out a home delivery. Instead, she made the decision to contact the call-in centre, which in-turn organized transport to the local hospital. The call-in centre also notified a “welcoming person” who met the mother and great grandmother when they arrived at the hospital and facilitated admission for what eventually resulted in an uneventful, safe delivery and departure back home the next day. We are aiming to achieve a similar outcome for all young mothers and newborns and over the next year and hope to achieve an over-50% facility delivery rate in the rural villages covered by the project – a population of about 500,000.

We are learning a great deal from the feedback families and community volunteers are providing us. With this information, the services are being modified and will eventually position them for scale up throughout rural Bangladesh.

Joining Hands to Improve the Health of Mothers and Children

A Collaborative Approach to Midwifery