Sara Maiga is a 30 years old mother living at Bukonyo village in the Ukerewe District, Tanzania. She is the mother of three children (two boys and one girl), and lives with her husband in a remote rural area of the Ukerewe Island. She is happy and manages a standard of living on which her family can afford most of the basic human needs. She has used the Ukerewe health facilities whenever she has been pregnant, as well as after the deliveries of her three children.

Sara says, “During the pregnancy of my second child, I was able to go for antenatal visits at the Bukonyo dispensary. One thing which I learned during my visit, which has helped me so far, is education on the ‘danger signs’ during pregnancies.” She continues, “Some of the signs, like bleeding and headaches, appeared to me when I was pregnant with my latest baby. I immediately rushed to the Nansio District Hospital for treatment and had my baby safely delivered.”

She even insists that, “If I had not done the antenatal care visits at the dispensary I would not have be aware of the danger signs. Maybe I would have assumed the danger signs I faced were a normal thing for pregnant mothers, and stayed at home waiting for an unsafe delivery day.”

Many mothers died in Tanzania during deliveries due to the lack of knowledge of the danger signs and lack of proper medical assistance and care.

Magere Manyama is a 32 years old fisherman and father of four children living at Chifule village in Ukara Island, Ukerewe District, Tanzania. For his first three children, his wife gave birth at home and was occasionally helped by a Traditional Birth Attendant (TBA). He was not aware of the need to be well prepared before the pregnancies of his wife, as no one – parents, family, even his wife – had ever taught him.

He says, “She was informing me two or three days before the deliveries on what was needed. At the time I didn’t have any cash to help her. She would even ask for new clothes (Khanga or Kitenge) to bring with her to the health centre for during deliveries. So since I didn’t know what was needed, I believed that to give birth at the health centre would be too expensive and not really important so I let her deliver our babies at home.”

During 2014, Magere had the opportunity to attend community meetings done by the IMIC project team on two occasions. He happened to be at the Muriti village and then at the Bukiko village on Ukerewe Island and attended the community meetings and learned many key issues especially on the need to be well prepared, birth planning and on the danger signs during pregnancies and on the importance of deliveries with a health professional for safe deliveries.

“When I was aware of the fourth pregnancy (now we have a two months old), I did all the preparations with the help of my family and during the delivery time, I brought her to the Ukara health centre where she gave birth to a healthy girl.

Magere has promised to use the lessons gained from the IMIC community meetings to educate other men in his village on the need to plan and to be well prepared to avoid problems.

Charles Kayanda is a Clinical Officer working for the Tanzanian Ministry of Health at the Murutilima Dispensary in the Ukerewe District. Charles has been trained since February 2013 in all the topics covered by the Improving Maternal and Infant Care (MIC) project on antenal, delivery and postnatal care as well as newborn care. Charles has explained, “I am so thankful to have attended the training sessions, it was very important to remind me all the subjects that I studied long time ago during my schooling. The training subjects that I appreciated the most included the steps to follow and good practices to do when facing a complicated delivery.”

He continues to say, “Before participating in the IMIC training, I used to refer women to the Muriti health centre or the Nansio hospital when they were having a complication such as breech (baby presenting the buttocks or feet first as opposed to the normal head-first presentation). Since I have been trained, I can help and have performed several breech cases successfully. I have improved my abilities and self-confidence in several areas, especially regarding complicated deliveries and saved lives of both mothers and their babies.”

“I have been trained on how to improve my knowledge and skills in maternal and child health, that is what I will continue doing this by using all the abilities which I have gained so far,” he concluded.

Not all the mothers can afford to go to a health centre or the hospital to deliver their babies, especially in Ukerewe where the roads are in very bad conditions combined by a lack of transport and petrol and the long distance are all factors that put the life of the mother and baby at risk. With all Ukerewe District health professionals trained in delivery practices the mothers can go to the dispensary near their house and have a safer delivery than ones would have at home. 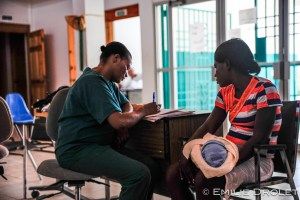 Ebola in Sierra Leone: Working to Treat the Most Vulnerable; Mothers and Children