Ebola in Sierra Leone: Working to Treat the Most Vulnerable; Mothers and Children

For the past six years, CAUSE Canada has worked in 1429 rural communities in the Moyamba District of Sierra Leone to decrease the incidence of maternal and infant mortality. When this region became infected by the Ebola Virus Disease in May 2014, these rural families became increasingly fearful and stopped visiting government health clinics for routine prenatal and infant nutritional screening. The results have been disastrous! By July 2014, the vaccination rates for children under 5 years had dropped from 99% to 76% (UNICEF November 2014). Government nurses were also told to suspend nutritional and growth screening and to avoid physical contact with patients, especially since gloves were in short supply. Meetings of more than 5-10 people were also made illegal, making it difficult to conduct community health training.

With financial support from UNICEF, CAUSE Canada’s 40 national health staff in Moyamba have worked tirelessly over the past 9 months to increase knowledge about Ebola in remote communities. Mothers’ Support Groups who had previously been trained in infant and maternal nutrition as well as the importance of immunizations, were then provided with key Ebola messages to relay to care-givers, teenagers, pregnant women and their families. In each target village Mothers Support Groups have been the primary educators about how to prevent the spread of Ebola. They teach about efficient hand-washing, proper burial practices and the avoidance of bushmeat. Each month CAUSE Canada staff meet with Mothers’ Support Groups in 445 hard-to-reach communities.

As of March 2015, there have been a total of 12,188 cases of Ebola in Sierra Leone, resulting in an approximate death count of 3854. The health, social and economic impact of the Ebola crisis will likely be demonstrated up to a decade after the disease has been eradicated. Women have been disproportionately affected. There are several factors that render women most susceptible to Ebola and other outbreaks. They have been and continue to be frontline caregivers and care workers, cross-border traders, nurses, and mothers in communities ravaged by Ebola.

Women have experienced reduced productivity in agriculture, trade (including cross-border trade), small businesses, and service sector activities. Since many women in Sierra Leone are responsible for the nutrition of their children, increased poverty resulting from Ebola directly impacts the nutritional status of these mothers and their children.

Maternal deaths have increased because of reduced antenatal and neonatal care in all three countries primarily affected by Ebola (Liberia, Guinea and Sierra Leone). “With the epidemic, there has been a breakdown in health services. Of the approximately 200,000 expected pregnant women in the last quarter of 2014, nearly 40,000 may not be monitored or may not have their babies delivered by a qualified person.” (UNDP Africa Policy Note January 2015). Although Ebola mortality in the 2014-2015 crisis has been the largest ever recorded, the negative impact on maternal and child health may even be more pronounced.

CAUSE Canada’s work through Mothers Support Groups continues to promote the monitoring of both pregnant women and children under 5 years. These women have been trained to do growth and nutritional monitoring right in their communities and to recognize important health issues in pregnant women. The effective referral of malnourished children or pregnant women with critical prenatal issues is still not optimal since hospitals continue to be under-staffed, ill-equipped and overburdened with patients.

CAUSE Canada has constructed 25 birth waiting homes in Moyamba District to accommodate expectant mothers with potential delivery problems who live a long distance from government clinics. Because these culturally appropriate facilities are located directly across from rural government health clinics, these pregnant women can move into these homes ahead of their due dates and be safely delivered by trained health professionals.

New cases of Ebola are now decreasing each week but the crisis has brought to the forefront the critical need for improved health services, especially for pregnant women and children. CAUSE Canada has found that public health teaching, as well as nutritional and prenatal screening, can effectively be implemented at the grassroots level by Mothers Support Groups, even during the Ebola crisis. 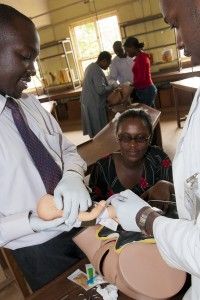